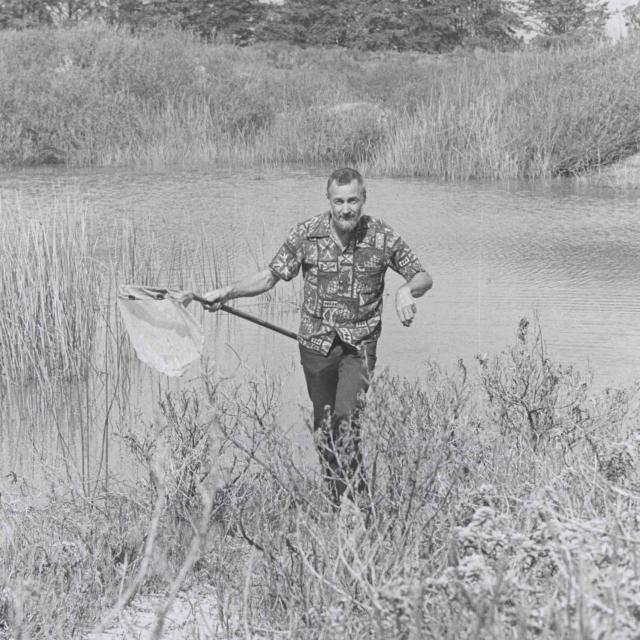 Adrian M. Wenner—UCSB Professor from 1962-1993 in the Biology Department (now the Department of Ecology, Evolution and Marine Biology), CCS Biology Faculty (1974-1993) and CCS Provost (1989-1993)—is not afraid of stinging controversies or buzzing the status quo. Wenner was a Zoologist who studied bees, and in the 1960s he published research that had other scientists in his colony swarming. Wenner’s theory that bee behavior did not rely on dance, published in 1966, challenged a theory that had been widely accepted for decades and earned German Zoologist Karl von Frisch a Nobel Prize. As critics quickly took flight, he did not back down and continued to drone on about his findings. (Ok...enough bee puns.) These developments led Wenner to change his field of research completely.

Born in Roseau, MN, in 1928, Wenner is one of a long line of beekeepers. According to a 1991 LA Times article titled “Lord of the Gadflies: Amid Stinging Criticism, Maverick Zoologist Adrian Wenner Challenges the Theory That Bees 'Dance' to Communicate,” his father was an amateur beekeeper in rural Minnesota, and as a child, Wenner helped tend the hives. His grandfather, four uncles, and several brothers and cousins kept bees as well.

After serving in the Navy as a radioman on a destroyer in the 1940s, Wenner studied Mathematics, Physics, and Education at Gustavus Adolphus College in St. Peter, Minnesota. While he pursued graduate work in Mathematics at Oregon State, Wenner soon began a new career by completing a Master’s degree in Teaching of Biological Sciences at Chico State University in California. "By the time Wenner had started on his Ph.D. in Zoology at the University of Michigan at Ann Arbor, bees were his specialty,” noted the 1991 LA Times article. Wenner was the first to discover a peculiar pulsed sound made by bees during their waggle dances. That discovery, in turn, led to his dissertation research at Michigan under the prevailing premise that this waggle dance constituted a “language,” as hypothesized by Karl von Frisch 10 years earlier.

Upon completing graduate school, Wenner began teaching at UCSB.  At first, Wenner, like all other bee scientists, believed Frisch’s theory. As a young professor at UC Santa Barbara in the early 1960s, he published numerous papers that supported the idea of communication by dance. But this was about to change. As documented in the LA Times article: “[...] in the summer of 1964, when Wenner [and his colleague] tried another experiment to elaborate on the language theory, something went wrong. [...By Wenner’s] interpretation, the bee behavior didn't seem to depend on dance information.” Wenner argued that the Nobel Prize-winning study did not account for “extraneous odor cues and varying flight paths.” Per the LA Times, although the Zoologist published numerous articles defending his claim, he was largely ignored. By the early 1970s he was ostracized by the bee community, journals would not publish his work, and he stopped attending conferences. In this same LA Times article, Wenner states “They [colleagues in the scientific community] credit me with going out to cause trouble, [but...] that's not true. I go out to have fun. [...] But there are too many people out there trying to make nature conform to their reality."

According to Wenner, since he was not conforming to the reality of other scientists, he was seen as an outsider and could not get any research funded. “When you are a professor at a university, you belong to a certain club and you are sort of obligated to get along with everyone in your club because you need to get your next paper published,” said Wenner in a recent conversation with CCS the day before his 90th birthday. After challenging the romantic idea of the bee dance, Wenner “didn’t belong to those clubs [... and thus] couldn’t get research grants,” he said. When he submitted grant proposals, he would get nasty comments because he challenged the bee language idea. Wenner, who grew up in the Great Depression, added that he didn’t need money for his research. “I didn't have any grants but the students were perfectly willing to be my assistants for no pay,” he added. “Some would get special credit for research projects, but most of them just loved doing it. We would take field trips, the whole group, 12 or 15 of us at a time. We would bring our own food and pay our own fees.”

Ostracized from the bee community, Wenner turned his focus to other things that sparked his interest. "I just basically generated a whole new career,” said Wenner to the LA Times. “And I would say I succeeded." Among other areas, Wenner focused on CCS while on hiatus from bee research. The Zoologist taught between one and nine classes in the College every year from 1974 until 1989 except for one year. Many of the CCS courses Wenner taught were aquatic biology related, remembered Frank Bauman, a CCS staff member and alumnus who took a number of Wenner’s classes which were often lab classes that usually met in a lab room or out in the field. “For example, we went to the UCSB bluffs [where campus housing now is located] to look at the marine life.”

In 1989 Wenner was appointed the College’s third Provost. Critical thinking is part of the CCS experiential learning model and Wenner brought it to CCS students who enthused curiosity and passion. Wenner mentored generations of undergraduate and graduate students and received numerous awards. During his tenure as Provost, Wenner established Computer Science as the College’s eighth major (now called ‘Computing), remembers Bill Ashby, CCS Provost Emeritus who was the Associate Provost under Wenner from 1990-1993. “In addition, Adrian put in place a lecture series that focused on the intersection of science/humanities that brought some eminent people to CCS,” said Ashby. “In a sense, this was a precursor to the current Transdisciplinary Workshop Series.” Wenner was at the helm of CCS until he retired from UCSB in 1993.

Upon his retirement, Wenner re-focused his efforts on small flying insects. He received a contract with the Nature Conservancy and the National Park Service to eradicate non-native Europeans bees on Santa Cruz Island. “First we had to locate all the colonies on the 96 square-mile island,” Wenner said to CCS. “With volunteers, including CCS students, it only took us two years to locate the 270 colonies.” Two years after that, the non-native honeybees were eradicated from the island. “No one had ever removed all the bees from an ecosystem before,” said Wenner proudly. “The reason I was doing it was the honey bees were pollinating all the different European weeds that had been introduced by the farmer and ranchers. By getting rid of the honeybees, those plants stopped getting pollinated. It is a whole different world out there.”

Wenner produced numerous publications, including the book “Anatomy of a Controversy: The Question of a “Language” Among Bees,” a 399-page insider’s analysis of the dance-language dispute written by Wenner and his frequent collaborator, Patrick H. Wells, published in 1990 by Columbia University Press. This book documented the fact that resistance to Wenner’s research rested not as much on evidence as on the training and attitude of scientists. Don Lubach, the Associate Dean of Students and a Lecturer in the Gevirtz Graduate School of Education, used Wenner’s book and experience to illustrate this distinction in speaking withUCSB Promise Scholars in October, 2016.

His legacy lives on in the Adrian Wenner Historic Insect Collection located at the Cheadle Center for Biodiversity and Ecological Restoration (CCBER) at UCSB.  Originally used as a teaching collection by Wenner for his general Entomology course taught from 1961 to 1993, this collection's diversity (9,000 insects in 21 orders and 246 families) is a valuable historical record of insects in endangered coastal California habitats. Additions to this collection continue by UCSB students who engage in the collection through the Natural History Collections Course, according to CCBER.

Now 90 years old, Wenner still advises a research group. “I have a whole research crew at UCSB,” he said. “We meet once a week. They are doing all of the same stuff I was doing and they conduct research all over the world. Advising them has been a wonderful experience.”