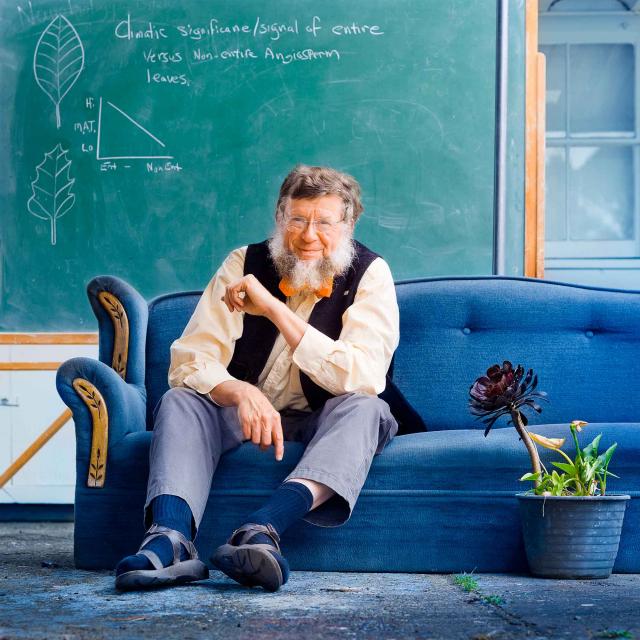 Bruce H. Tiffney is an American paleobotanist and was the Dean of the College of Creative Studies from 2005 to 2016. Over the years as CCS dean, he became know for his wizard's hat and habit of staying late into the evening at the College!

Tiffney graduated from Boston University with a degree in geology in 1971, and after earning his Ph.D. in botany at Harvard University in1977 became an assistant then associate professor of biology at Yale University where he taught for nine years and also served as curator of the D. C. Eaton Herbarium and the Paleobotanical Collections at the Peabody Museum of Natural History. His training bridges geology and botany, while his research expertise lies in the evolution and distribution of plants in geological time (fossil record), particularly as represented by fruits and seeds. He has worked with fossils from northern Africa, eastern North America, and most recently, from the auriferous gravels of California.

Tiffney came to UCSB in 1986 and has 30+ years of dedicated service, teaching, and research at the university. He is passionate about student learning and accelerating that learning with original research and creative work. His teaching includes courses in general paleontology, paleobotany, and flowering plant systematics. Along with Hank Pitcher in the CCS art program, Tiffney also taught courses on flower and landscape painting. While Tiffney's UCSB position is in the Earth Science department, he also has an appointment in CCS Biology, working with students interested in plant biology, paleontology and evolution, and joining biological colleagues in teaching the introduction to research course to new CCS biology students each fall. He has served on numerous committees, notably the Chancellor's Sustainability Committee, and engaged in a range of other university activities, including recently as chair for the UCSB Search Advisory Committee for the University Librarian

Tiffney has numerous publications, including articles in Review of Palaeobotany & Palynology and American Journal of Botany, among others. He is a fellow of the Geological Society of America, and appeared in The Real Jurassic Park and The Future Is Wild.

He and his wife Robin make Santa Barbara their home. The Bruce H. and Robin G. Tiffney Summer Undergraduate Research Fund was established at CCS in 2016. The fund honors Tiffney’s spirit and tremendous influence within the College and University, and supports summer research experience of qualified undergraduate students majoring in biology at the College.