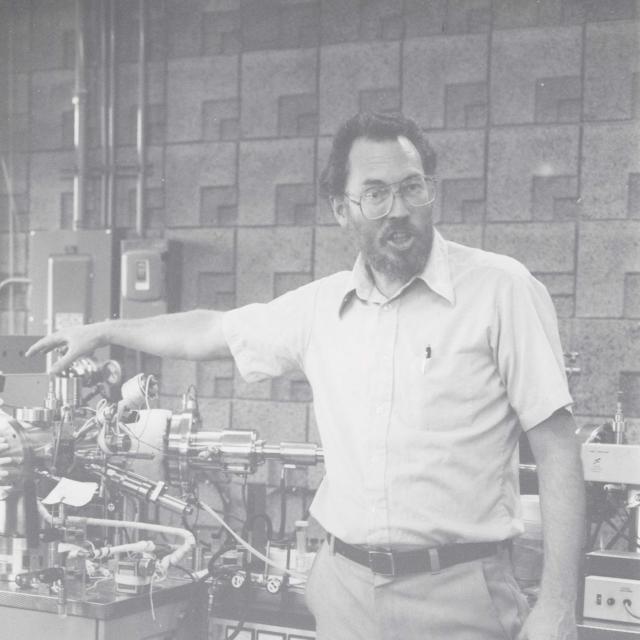 CCS: How did you get involved with CCS?

Don Aue: To tell you the truth, I don’t remember exactly how it happened, but I came to UCSB in 1968 and from the beginning, I was working with undergraduates quite a bit in research and I noticed there were CCS students doing research in Chemistry. And then roughly around 1980, or thereabouts, I became involved in teaching a laboratory class that we designed for CCS and honors students for Chemistry majors particularly. I started teaching in CCS at that point, and I still don’t remember what exactly was the spark that led me to start teaching in CCS. But from there, I continued teaching regularly at CCS through the early 1990s or so.

DA: Yeah, I have been here as long as the College has.

CCS: How did your classes in CCS differ from those you were teaching on campus?

DA: We had two kinds of Chemistry classes we taught for CCS. One was that laboratory class that I talked about earlier, a class for second-year students to try to get them ready to do research after their sophomore year. That class had both laboratory and lecture material; the lecture material included all the material that was part of our normal curriculum in the spectroscopy course for undergraduates. Between the lecture material on spectroscopy and the practical work that they did in the lab, the students would be fully ready to do research.

The other kind of class we taught in Chemistry was sort of special topics classes that supplemented the curriculum. This class was more than an honors version already part of the curriculum. We would dive deep into some subject and look into current research in that area.

One class we taught in the late 1990s was quite unusual. We identified four or five CCS students from the laboratory class and other classes, and we taught a special class for them. We took a new half a million-dollar instrument that I was involved in purchasing, called a mass spectrometer—and we had the students work on a project using that instrument. The students designed an attachment for that mass spectrometer, and they did the whole thing—conceived what they wanted, designed how it would be put together, got the parts, and were trained in our machine shop in order to fabricate those parts and make the attachment. The students put it all together in the period of about a quarter. So, that is an example of a unique kind of class. I taught various seminars like that—special classes that would not be part of a student’s normal class experience.

CCS: You also started the Summer Undergraduate Research Fellowship (SURF) program (renamed The Create Fund in Fall 2017) at CCS. Can you share how that program got started?

DA: Back in the mid-1980s we started the SURF program that grew out of something that I had been doing in Chemistry from the time I first arrived at UCSB. There was a National Science Foundation (NSF) program that sponsored undergraduate research projects during the summer. Those undergraduate research fellowships through NSF continued up to about 1980, when that grant program at NSF was temporarily discontinued. When Max Weiss took over as CCS Provost in 1984, I became Associate Provost of the College and I noticed that CCS, if we used our money carefully, would have the capacity to partially fund a program for math and sciences that would pick up where that NSF program left off.

So, I started that within CCS, and over the years the program got bigger and bigger. The program attracted funding from donors, and now it is entirely donor-supported. From the beginning, we had partial buy- in from the faculty researchers and they helped to sponsor and fund the program themselves by using some of their research grant funds to supplement the CCS SURF fellowships. So, I’m really pleased with how SURF worked out, and it has become a real focal point for the careers of a lot of students.

SURF was created based on an apprenticeship-style training program, that’s well known to work.  If we look at the apprenticeship model in its current state, it is really efficient and doesn't take that much money to have a really large impact on a lot of people. And money wise, this type of program leverages the interest of research groups in pursuing their own research so they’re really happy to have well-prepared undergraduates come in as apprentices.

The research groups are willing to even put in some of their own money. All the supplies, the equipment, and the graduate student and faculty supervision are all provided by the directors of the research project. A big part of the investment in the program comes from the people participating, including the faculty, graduate students, and the CCS students who are spending their summers in the lab. They probably don’t make as much money as they might make in a regular summer job, but it really pays off.

So, SURF is something I’m really pleased with how it worked out, and it has become a real focal point for the careers of a lot of students.

DA: The process hasn’t much changed over the years. The students fill out a short application form, and we review what the students submit with their application, including their transcripts, research description, and academic background. And then our objective is to try and fund everybody who is qualified. Our objective is not to rank the proposals and then say, “you know you didn’t make the cut.” We try to fund as many students as we can. On the whole, we’ve pretty much succeeded in funding qualified applicants. The number of applications has gone up over the years, but the process has always been the same.

CCS: You have been part of SURF for over 30 years. What keeps you so engaged?

DA: Well, it is the kind of program that helped me get started in Chemistry. I started doing summer work in a research laboratory in high school, and I continued all through my undergraduate studies. I worked with famous chemists, so I feel a big debt to those people and to the spirit of what they were doing. I just feel like I owe a lot to that concept and I like to, as long as I can make a contribution, help contribute to keep it going.

CCS: How would you describe the College in your own words?

DA: I have what might be an unusual point of view on what CCS is about. Maybe different from a lot of other people. All the things that the College does, you can do anywhere—all it takes is to have the right people who are devoted to it. But you don’t have to have a College of Creative Studies. What I think makes CCS successful is the fact that it’s a College of its own as opposed to the way such things are handled at most universities. Almost every college has some version of an honors program; I still don’t know of any other institution that has a program that is equivalent to CCS.

A problem, however, with honors programs that are part of regular colleges and departments is that they have to compete with graduate research programs for campus funding and are generally going to come out with a lower priority. When you have a college like CCS, which has no graduate students, there’s no sponsoring of research itself. The emphasis is entirely on doing things that help undergraduates in their careers, and the College’s budget can’t be pulled to support other things. I think that is the unique thing about CCS, as opposed to any other administrative structure that keeps it alive and healthy.  Then, it builds on that enthusiasm that it gets from the faculty and students, and also from the staff--that is contagious. And I think all the staff that I’ve seen work here are really interested and dedicated to the idea of the College, and so you get everybody pretty much on the same page.

CCS: When you are not doing chemistry, what else interests you?

DA:  I play a lot of tennis and help organize a local senoirs tennis league.  I like all sorts of sports and outdoor recreation and involving grandchildren - skiing, whitewater kayaking, diving, rock climbing, lots of things, plus chemistry.  In recent years, I've started raising bees, whichhas been a family tradition that goes back to my father and his father.

CCS: Do you get to harvest the honey?

DA:  Well, we've taken a little honey, but most of it has been needed for the bees to survive the winter so far.  Bees have been in decline, especially locally since recent fires, so harvesting honey has not been the main point.