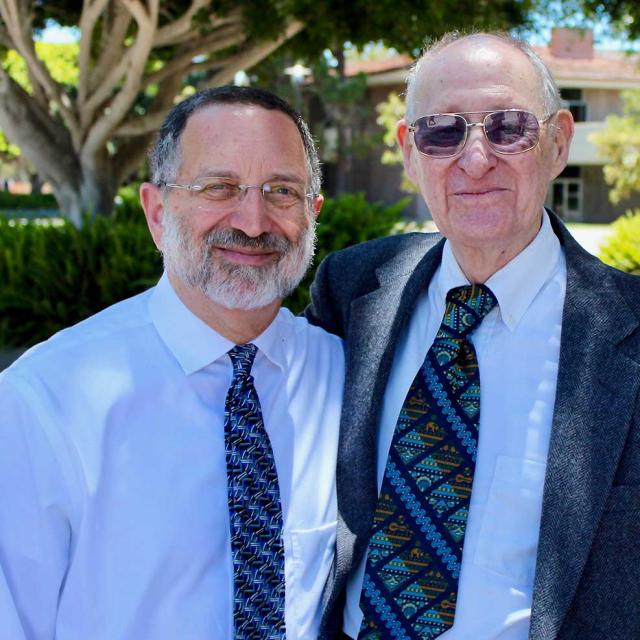 CCS: As a student, how did you hear about CCS?

Norman Badler: I was a bit lost on what courses to take when I arrived at UCSB in 1966.  I met a few students in the dorm who told me what Math courses I should take to be a Math major.  Virginia, a poet and musician, was among these friends; she told me that she was applying to this new “College of Creative Studies.”  This sounded interesting to me as it had a Math major, so I applied. Virginia applied to Literature with an interest in poetry. We were both admitted to the inaugural class.

CCS: Why did you choose to be part of the “CCS experiment” and venture into this new College?

NB: I always liked Math and thought I was reasonably decent at it.  I was one of the early experimental subjects of the “New Math” in elementary school, and I taught myself Algebra in middle school.  I already had a summer high school experience in Math (courses in logic, geometry, and computer programming at San Diego State College) so I was open to both the novel opportunities and the more personal level of instruction that CCS offered.

CCS: It must have been interesting being one of the original students of the College. What was it like during that first year?

NB: Being part of the first year of the College was intimidating, exciting, and humbling, but all in a good way.  Our inaugural Math class had two Putnam Award-winning students in it (in a class of 5!).  I had never even heard of the Putnam Math exam.  I actually tried taking it once and could answer no questions at all.  But most of all, the course flexibility in CCS was attractive, and I took great advantage of it.

Being part of the first year of the College was intimidating, exciting, and humbling, but all in a good way.

CCS: Are there any memorable stories from your time at CCS?

NB: I will always remember the first day of class with Max Weiss.  He looked at us, offered that he had never done this sort of class before, pointed to one of us and then said: “Up to the board!”  I learned to literally “think on my feet” in that class, and it was a skill that served me well after I became a professor at the University of Pennsylvania.

NB: I am a tenured Full Professor in the Computer and Information Science Department at the University of Pennsylvania.  I have been on the faculty since 1974.  The College’s impact on me has been significant in at least two ways. First, CCS has kept my mind open for interdisciplinary problems and collaborations.  These are reflected in numerous publications that cross Computer Graphics with Anthropometry [the scientific study of the measurements and proportions of the human body], Dance Notation, Psychology, Human-Computer Interaction, and Archaeology.  Second, CCS has motivated my own version of interdisciplinary studies: the Digital Media Design (DMD) undergraduate program at Penn that I founded.  DMD is a Computer Science Engineering degree with a technology backbone in Computer Graphics and electives primarily chosen from Fine Arts, Communications, and other creative or analytic programs.  DMD will be 20 years old next year! This degree has defined the educational substrate for students entering the movie special effects and gaming industries.

CCS: What did you study in graduate school and how did CCS prepare you for your studies?

NB: I went to the University of Toronto to complete my Masters in Mathematics.  I became increasingly frustrated, however, with the volume of Mathematics knowledge that I would have to assimilate in order to get my Ph.D.  Since I had already been working (during my fourth year in CCS) as a professional computer programmer, I thought that the Ph.D. in Computer Science would be a better fit.  I applied for the program, was admitted, and received a Canadian Fellowship to pursue these studies.  I received the Ph.D. in Computer Science in 1975 shortly after I began my career as an Assistant Professor at the University of Pennsylvania.

CCS: At CCS, do recall any other faculty that stood out to you? If so, who and why?

NB: Max Weiss was clearly my primary mentor.  I appreciated his patience with this mediocre student who rather lacked enthusiasm for Mathematics analysis.  But one early CCS opportunity to take a class from David Culler was truly life-changing.  In his computer class, we were allowed to use the ARPANET computers on campus! These were curious double keyboard systems with a CRT display.  I spent that class algebraically solving and then drawing mathematical formula solutions on the character-oriented display screen. I was unaware of it at the time, but I was hooked on computer graphics: my future academic and professional niche.

NB: I grew up in a non-academic family, but I was fortunate to have teachers who encouraged me and provided novel opportunities for me from about 5th grade on.  CCS was another novel experience that I took advantage of in several ways.  A couple of notable CCS opportunities shaped my life choices.  I already mentioned David Culler’s computing class responsible for triggering my computer graphics interest.  Another was the flexibility in the course requirements.  I was able to substitute the second required English course with a Russian language course!  A fellow CCS student and I practiced the dialogues together and we did pretty well.  I remember no Russian.  However, Russian verb structure is quite different from English.  Knowing this alternative tense structure ultimately led to a core tenet of my Ph.D, dissertation on the computational conceptualization of temporal events.  I remain interested in this domain for my research to this day.  Thanks—CCS—for the requirements flexibility!