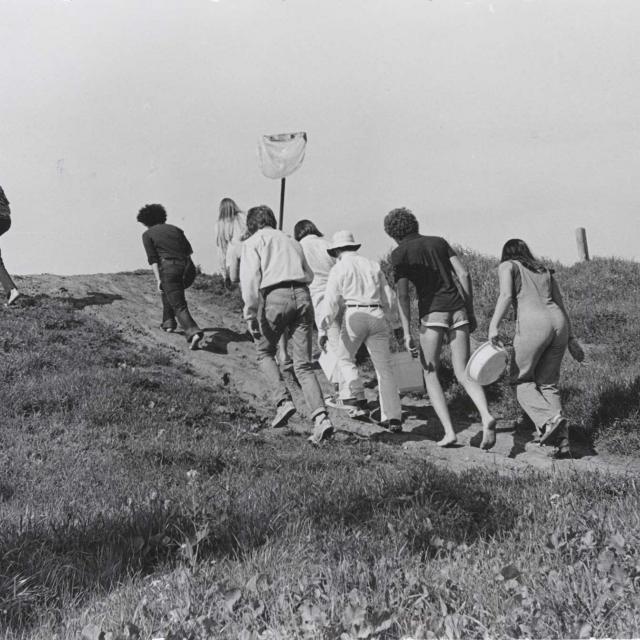 A class where Arts and Humanities students collaborate. A class where students explore the natural environment. A class dating back to the beginning of CCS. This is Walking Biology.

Designed around beloved UCSB and CCS Professor Beatrice Sweeney’s (1914-1989) informal chats with non-science students, the field class is a place for CCS students to learn by doing. Although it has been around for nearly five decades, it has seen only three professors —Sweeney, Christina Sandoval and Claudia Tyler (the current professor). While the general structure of the class has remained, each faculty member evolved the content around personal and professional experiences.

Walking Biology can trace its origins back to the first days of the College. Hank Pitcher (CCS Art Faculty) was an Art student who was keenly interested to learn about subjects outside of his discipline. Before it was an official course, he would go to Sweeney’s office to ask her a variety of ecological and biological questions. “It was really informal,” remembered Pitcher.  “I used to go to her office to ask her questions about this or that because it was so interesting to talk to her. Then, in order to explain something she would say, ‘Well let’s go walk down to the beach.’” The class evolved from this idea of students walking around campus and picking Sweeney’s brain about the surroundings. Pitcher recalled: “It really started with curious Art students going and asking [Sweeney] questions.”

Sweeney was passionate about Biology from as early as she could remember. However, since she did not take a formal Biology class until she was a freshman at Smith’s College, she lived her “early scientific life entirely out of school,” she said in her 1987 autobiography. This included identifying and recording flowers around her New England home and attempting to create a bog in her backyard. Sweeney was revolutionary for women in science. Her college botany professors , she explained, “were fine women, but they were all spinsters without private lives.” She vowed to be different—to be a scientist and have a family. “After all, men in science did not have to give up family life.” Over her career, Sweeney published 139 scientific manuscripts and was a champion not only for women in science, but for any young person who had an interest.

Sweeney was also committed to teaching undergraduates at CCS. She took an interest in every student that came to talk to her. “She always had a smile on her face […] it wasn’t that she made you feel important, it was the excitement of what is possible. I would just go to her office and talk to her because it was so interesting,” recalled Pitcher fondly. “She seemed to be interested in what I had to say, too. She was just so remarkably open and it was just fun for her to talk about it with us.” The biologist happily chatted with every student even if they were  not in her discipline. “Their questions enlivened discussions and their ideas were an inspiration,” Sweeney wrote of CCS students in her autobiography.

From these chats with Art students, the class soon became formalized (under a less creative name—the Walking Biology moniker came a number of years later) and opened to students of all majors.  Over the years, the class became more structured and a set curriculum was developed, but to this day it continues to be designed around the CCS ethos of spontaneous chats between students and faculty.

When Sweeney became emerita in 1982 she continued to teach the class until she passed in 1989. Then the reigns were passed onto Sandoval who taught the class for about five years. She then left the College to become the Reserve Director at the University of California Coal Oil Point Reserve.

Since Walking Biology is quintessential CCS, Tyler was recruited to CCS based on her enthusiasm for the class when Sandoval left the College.  “I was initially hired to do Walking Biology,” said Tyler. “We did not have the CCS Introductory Biology series yet, […] so they needed somebody to teach Walking Biology and then a couple other classes.” Once she was hired, Tyler was able to use her training as a community ecologist to evolve the class even further.

Tyler’s iteration of Walking Biology expanded the class from the UCSB campus to the greater Santa Barbara area. “I absolutely wanted to talk about, in general, ecological principles and evolutionary concepts,” said Tyler. “I really wanted to get students to see the diversity of habitat types that we have in this region.”  The class is offered once a year and, although there are some places she visits every year, Tyler’s goal is to see a variety of places in our beautiful county. She always takes students down to the Carpinteria Bluffs to see the harbor seals and to Coal Oil Point; sometimes they go up to Knapp’s Castle, Lizard’s Mouth, or Arroyo Hondo Preserve. Nature is always changing the landscape so regardless of whether it is a site her class visits every year or for the first time, Tyler checks out the locations before each trip. She explained: “It is true that even if I go back to the same site every year, it’s different for me.”

Many UCSB and CCS students do not take full advantage of the amazing Santa Barbara wilderness while they are on campus. One of the main goals of Walking Biology is to get the students to experience and appreciate the region’s natural beauty.  “The secret agenda is to give the students a chance to see places that are basically in their backyard but [of] which they might not be aware,” said Tyler. Even if the students have been to the site before, Tyler hopes “...we see things in a little different way.”

The secret agenda is to give the students a chance to see places that are basically in their backyard but [of] which they might not be aware.

Keeping up with tradition, Walking Biology is open to students from all majors. The class attracts non-biology students who like being outside, enjoy hiking, or just love learning about biology. “Having a variety of students is so fun because I get to know some of our students that are not studying biology,” Tyler said enthusiastically. Tyler just asks that the students come each week with an open mind. “They have to be open,” she explained. Counterintuitively, this is sometimes harder for biologists. “Sometimes the biology students are the ones that are a little bit tougher. It is really easy [for them] to hear something and go, ‘Oh yeah, I know that, I’ve heard that before,’ and then not listen. That is how they miss stuff.”

The class, like all CCS classes, is not taken for a grade but rather for variable units, allowing Tyler to focus on concepts rather than memorization. “It gives students a little bit of room to breathe and to absorb a little bit more of the patterns.” Students are required to write journal entries each week, asked to identify two new species, and encouraged to draw sketches and write haikus. Some even bring out watercolors and paint. The only other requirements are attendance and a group final at the end of the quarter. “Maybe one more requirement,” Tyler joked, “is they all have to be able to identify poison oak!”