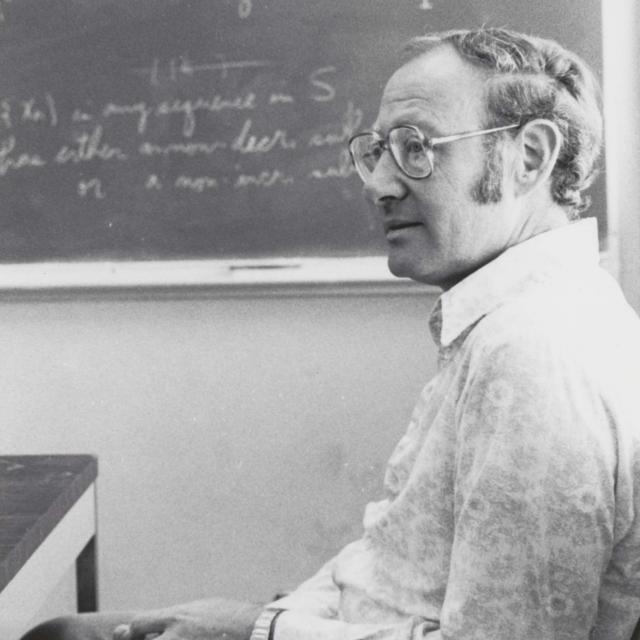 When UCSB Chancellor Vernon Cheadle directed Marvin Mudrick, the College of Creative Studies (CCS) founder and first Provost, to design the College, he and Mudrick formed a committee of key faculty members across campus to help turn this revolutionary idea into reality. Max Weiss was one of them and subsequently became the College’s first Mathematics Faculty member. An associate professor who had only been on campus less than three years, Weiss was one of the key faculty throughout the College ’s first decades and his influence is still present today.

As the College’s first Mathematics faculty member, Weiss built the CCS Mathematics program around what he, as a Mathematician, would be interested in.  “I analyzed what a professional Mathematician did and designed the program so people who wanted to do only Math could get in and only do Math with a few side requirements.” From the very beginning, CCS students learned by doing.

According to Weiss, the moniker “College of Creative Studies” has been misunderstood from the very beginning of the College. Weiss remembered: “You can’t imagine how many of my colleagues joked by saying ‘oh, you’re creative.’” From the beginning, “Creative” was not used in the way it’s commonly used today. According to Weiss, many people mistook the College.  “We interpreted ‘creative‘ for being an adjective for studies. In other words, we weren't claiming to be more creative than other departments. We wanted to educate in a creative way.” Even though the College’s name is confusing to many, it began to resonate with students, alumni, and faculty.  When Weiss became Provost, he “petitioned that we change the name of the College [..] but it got vetoed down smashingly because everyone loved the name.”

From the very first CCS classes in the Fall of 1967, Weiss taught in experimental ways. Weiss never enjoyed teaching within the lecture-based system. “I describe the lecture system in a funny way,” said the Mathematician. “There's some knowledgeable person standing in front of a whole bunch of students answering a whole lot of questions they've never asked.” Instead of lectures, the College’s curriculum was (and still is) based around seminars. Remembers Weiss: “We had an informal way of interacting with the students to make them ask and think of questions. This was one of the distinct differences between the College [and other programs].”

Another innovative aspect of the College is, of course, the grading system. In lieu of letter grades, students are evaluated on a grading unit scale. Weiss loved this because it enabled him to evaluate students in non-traditional ways. “The grading system was in place from the beginning and was Mudrick’s idea,” said Weiss. “Using credits instead of letter grades was a marvelous idea.”

The innovative curriculum was successful from the start. Four of the original CCS students were in the Math program, according to Weiss. “Three of them went on to receive Ph.D.s and the fourth got a Masters in Math,” boasted Weiss. “ Additionally, one student won the famous nationwide Putman exam as a second year and third-year student and then went on to Harvard. This was a super call of high powered students.”

One of these early students was Norman Badler. 50 years later, Badler still remembers the first CCS Math class. “I will always remember the first day of class with Max Weiss,” he said in his CCS 50 for 50. “He looked at us, offered that he had never done this sort of class before, pointed to one of us and then said: ‘Up to the board!’” Badler, who is now a full professor at the University of Pennsylvania, continued: “I learned to literally ‘think on my feet’ in that class, and it was a skill that served me well after I became a professor at the University of Pennsylvania.”

Weiss grew up in a farmhouse in Centerville, Utah. He moved to the east coast to attend Yale University, where he received a Bachelors of Arts in Mathematics and Philosophy. After receiving a Master’s in Mathematics from Cornell, he joined the faculty of Reed College. Remarked Weiss:  “Being accepted to teach at Reed College was a very great turning point for my career.” The Mathematician went on to say, “It was just a black and white kind of change because I had matured, and I could accept myself for who I was.” He taught at Reed College for two years and then received a Ph.D. from the University of Washington in 1962. He spent a year as an instructor at the University of Washington and then a year at the Institute for Advanced Studies in Princeton. Weiss was looking around the country for a university that would be a good fit for him to become an associate professor and UCSB stood out. At the time, UCSB was a small university with about 6,000 students that, under the direction of Chancellor Vernon Cheadle, was just beginning to invest in high-level faculty. “I just thought I would belong there and I decided that I would be able to grow with the campus,” remembered Weiss.

Three years after he came to UCSB, he was part of the founding CCS faculty. He quickly became one of the most trusted faculty members and Mudrick appointed him Associate Provost in the early 1970s. “I wish Mudrick were alive so he could continue to sing my praises,” he joked. Although he never saw himself as an administrator, in 1984 he became the College’s second Provost. “It was a job that I just didn't want,” said Weiss about the job of Provost. “However, I understood the job—I understood the College—so I was selected to be the Provost.” When asked why he took the job, Weiss replied: “I was just so convinced what I was doing was right and I had the administrative talent to do it.” Weiss served as the College’s Provost until 1989. To demonstrate he truly did not enjoy being an administrator, Weiss said he was offered higher administrative jobs at UCSB on many occasions, but “turned them down because I am not an administrator—I am a teacher and a researcher.”

Reflecting on his career, Weiss, now 84, considers himself lucky. “I loved my years in the College,” said Weiss fondly. “In fact, I feel guilty about where I'm at and the generation I was brought up in—the Sputnik generation—because [...] I was able to do what I wanted and had fun doing it in the industry I wanted.”