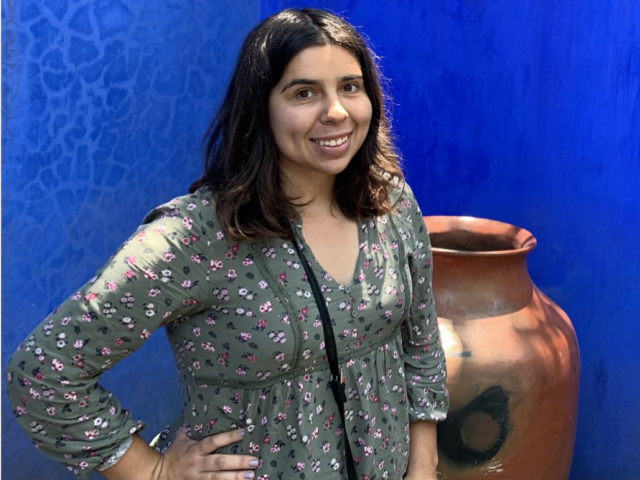 CCS: What is your major and why are you passionate about it?

Emily Lopez (EL): I am a third-year CCS Mathematics major. In mathematics, I pretty much study the abstract structures of common phenomena: graph theory can be used to study how people are connected on social media, real analysis can help us understand the calculus that is fundamental to physics and engineering, optimal transport can assist in image comparison, the list goes on…. There are so many stories these branches of math can tell, and it is so awesome to discover and see these connections which are not obvious. Of course, when studying math, it can be challenging, but I would also say that my studies have encouraged me to increase my awareness and to look at things in different ways, which helps at both the academic and personal levels.

CCS: How did you hear about CCS and what motivated you to apply?

"I [as a first-gen student] did not really know what I was getting myself into. I knew I loved mathematics, but I did not know what you could do with such a degree. I have seen what it means to be a mathematician from the interactions I have with my instructors, thanks to the nature of CCS."

EL: I received an email about the college from Professor Karel Casteels in the CCS Mathematics program. I had never heard about it before, not even during my tours or insight weekend at UCSB, and was thrown off with the name as I, like many, originally thought it sounded like an arts school. Looking into it more and being invited to sit in on a class, I realized that the word “creative” was referring to the college’s pedagogy. I witnessed the flexibility and the freedom students had when studying mathematics, the collaboration when problem solving, and the quirkiness of the college evinced by the stuffed animals and giant ears in the hallway. I really liked the idea of being a part of a community of scholars who were passionate about their studies.

What really caught my attention about CCS was the mentoring. No one in my family has gone to college, so stepping on a college campus for the first time felt like I was in a whole other world, drastically different from the small town I lived in. Though wide-eyed and in awe of all the opportunities one can have when pursuing an education, I did not really know what I was getting myself into. I knew I loved mathematics, but I did not know what you could do with such a degree. I have seen what it means to be a mathematician from the interactions I have with my instructors, thanks to the nature of CCS.

CCS: As a first-gen student, what has your experience been like at UCSB?

EL: In the beginning, it was a very difficult transition coming to a university campus. I was homesick and missed my family, my friends, and everyone who I cared about. In the CCS mathematics program, I am one of the few women, one of the few Hispanics, and one of the few first-generation college students, which made me feel very different initially. Often I felt my math background was lacking as I did not have the same role models or resources as many of my peers. When sharing my experiences with others, I could tell some did not really understand my struggles or see how their actions affected me. I do not hold it against them as we just came from different backgrounds; however, that does not mean it was not at times hurtful. I thought it was my fault for feeling so different and behind from my peers for the longest time, which I later discovered that my experience was common among underrepresented individuals in STEM [Science, Technology, Engineering, and Math]

I was lonely and lost, and I felt very misplaced at CCS, let alone at the university. Eventually, I found my support system at the Center for Science and Engineering Partnerships (CSEP). Selected as an Early Undergraduate Research Experience and Knowledge Acquisition (EUREKA) Scholar, I participated in a research-intensive program alongside other interns who were also part of underrepresented minority groups. We were all passionate about our research projects, had similar challenges with navigating the research side of academia, and celebrated each other's achievements with ice cream at the IV Drip. For once I did not feel so alone and could be myself—remaining true to my cultural identity while also being a researcher. It was communities at UCSB like that at CSEP, the UCSB Society for the Advancement of Chicanos/Hispanics and Native Americans in Science (SACNAS), and the McNair Scholars Program that helped me find belonging in my field and to begin enjoying my time at UCSB. These programs have been transformative for me and other students from underrepresented backgrounds thanks to the immense support from our mentors. I hope to pay it forward for all those who helped shape me as a mathematician by coordinating this year's Summer Institute in Math and Science (SIMS), which is where my STEM journey started. 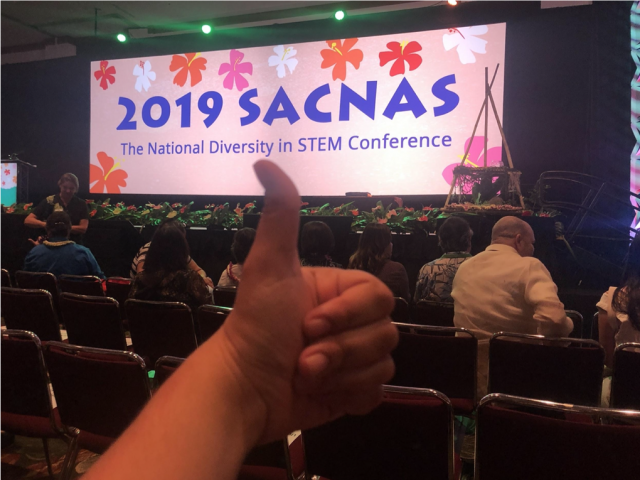 CCS: Any moment or experience stand out for you at CCS?

"I am thankful that CCS helped make my ambitions have no boundaries..."

EL: I am thankful that CCS helped make my ambitions have no boundaries, especially when those ambitions were financially out of my reach. I remember receiving the news to present my research at the 2019 SACNAS [The National Diversity in STEM Conference] Conference in Honolulu, Hawaii. I was so happy! Then, I was hit hard with the harsh reality: I did not have the money to go nor did I want to put the financial burden on my parents. I applied for the CCS Travel Grant, and because of generous donors, I was able to attend the SACNAS conference that changed my perspective in STEM and the meaning of an education.

The feedback and the experience of presenting my poster were invaluable. My experience was more than just the poster session, however. Hearing keynote speakers such as mathematician Pamela Harris and UC San Francisco professor Esteban Burchard’s stories of their journey to higher education nearly brought me to tears because I could relate to their struggles of being minorities and having the same hopes to make STEM a welcoming atmosphere for all. I have come to realize that there really is not a right way to be a mathematician as I walked up to booths to meet mathematicians at Amazon, talked to professors such as Ken Millett, and received mentoring from Number Theorist Bianca Thompson. These connections and relationships showed me that there is a place for me in mathematics. Without the support of the CCS faculty and staff who helped me find and receive a CCS Travel Grant to attend SACNAS, I would never have had this opportunity that opened so many doors for me.

"Without the support of the CCS faculty and staff who helped me find and receive a CCS Travel Grant to attend SACNAS, I would never have had this opportunity that opened so many doors for me."

CCS: Any insights or advice to current or prospective students?

EL: When choosing whether CCS is the right fit for you, I think it is important to consider how much you can grow as a student with this free-form education rather than what you know now. Maybe in the beginning you do not know what you want to research, or even what research is; maybe you do not know what you want to do for a career; or maybe you do not know much about the advanced topics of your prospective major. This was pretty much me when I applied to CCS, but what I did know was that I was very passionate about my major and wanted to learn it to the greatest depths as possible. All of the students at CCS come from different backgrounds and come in with varying understandings of their fields, but what is similar among us all is our curiosity and drive.

"All of the students at CCS come from different backgrounds and come in with varying understandings of their fields, but what is similar among us all is our curiosity and drive."

Now, once you are on campus, find your support system and do not be afraid to ask for help. It is extremely helpful to be surrounded by those you can connect with as well as mentors who can help you further develop your passions! Professional organizations that have undergrad chapters are a great place to start!