CCS alumna, scifi scientist, disaster researcher, and science communicator returned to CCS to give a lecture on how parties can enhance disaster preparedness

by Emma Shapiro and Will Proctor 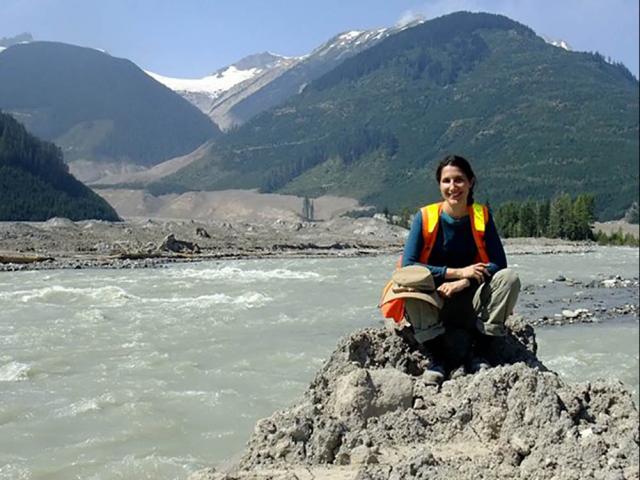 Do you know what steps to take if an earthquake or fire destroyed your home? If you do not know how you would react, you are not alone. As a disaster scientist and communicator, Mika McKinnon (CCS Physics '05) has made a career out of helping people prepare for natural disasters. Earlier this month, McKinnon returned to CCS to give a lecture on how parties can enhance disaster preparedness and spend time with students across all majors.

CCS was McKinnon's last stop on a week-long visit to California, which exemplifies her interdisciplinary career.  She started her trip evaluating the emergency preparedness of Disneyland. "[Disneyland] is one of the best places to be during the Big One in LA," McKinnon said. "They are extremely well prepared." She then toured Virgin Orbit, a commercial space company that plans to launch satellites into orbit from airplanes. Just before heading to UC Santa Barbara, McKinnon covered the launch of the Mars InSight Spacecraft to Mars from the Vandenberg Airforce base in Lompoc, California. 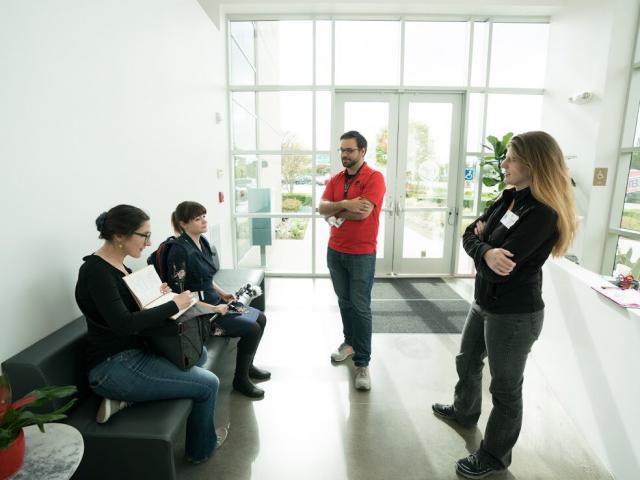 McKinnon is currently researching landslides in space for Project ESPRESSO, a research project funded by NASA. Once the spacecraft lands on Mars, she hopes to use its observations on the lander to further her research. According to McKinnon, the launch was executed perfectly. "It was beautiful in every possible way, except that it was behind an incredibly thick fog bank so we could see nothing." Although a little anti-climactic, the launch, which was the first interplanetary mission from the West Coast, was a huge step forward. "It is strapping a precision instrument to explosives, and hoping everything goes well," explained McKinnon. "I'm delighted it did; the next big stress point is going to be on Monday, November 26, 2018 when it arrives at Mars." When the spacecraft is safely on Mars, the fun will begin for McKinnon. "I will personally be extremely excited [when the spacecraft lands] because it is a robotic equivalent of me," she said. "As a geophysicist, it has all sorts of tools that I have personally used in the field."

McKinnon did not initially plan on attending the College of Creative Studies or majoring in Physics. McKinnon was accepted as an undeclared student to many of the top universities in the nation, most notably Harvard, MIT, and Stanford. However, when Francesc Roig, who at the time was the head of the CCS Physics program, gave her a call and suggested that she come to CCS, she decided to go for it. Thinking back on this decision, McKinnon said, "It sounded cool to be able to do a mix of sciences when I knew I wanted to do science but wasn't quite sure what. The interdisciplinary nature of College of Creative Studies was really attractive. Retroactively, it is the best decision I could have possibly made."

At CCS, McKinnon was surrounded by peers who motivated her to work harder and push herself. "CCS is very competitive in that you do very intense work," she noted. "You're pushed incredibly hard, you have to be smart, you have to be clever, you have to be creative." At the same time, CCS students are encouraged to work collaboratively as a group. Mckinnon added: "If one of the people in your group is struggling, you help them–everybody succeeds together. Instead of competing against each other, you create more interesting solutions; you create a more interesting future." While at UCSB, she led a CCS student colloquia on science in fiction, relaunched the Society of Physics Students chapter, and "could not resist enrolling in ballroom dance every term."

Following her time at CCS, McKinnon attended Green College at the University of British Columbia. After earning a Master's in Geophysics studying landslides, which she teases is a Master’s in Disasters, McKinnon started working as a field geophysicist, bringing equipment into the wilderness to collect data. When something breaks (and something always breaks), there is often no cellular reception to look up how to fix things. "You can't just keyword google search a solution, you have to be able to fix it with whatever's in your pockets and your tool bag, and whatever knowledge you have," said McKinnon. She uses all of the back of the envelope physics knowledge she has built over time to troubleshoot and fix the problem. She added, "[I use] all of those soft, squishy skills that aren't technically on tests but are essential to figuring out […] how to fix it."  Following her work as a geophysicist, McKinnon transitioned to science communications work. Her bylines run in BBC, New Scientist, io9, Gizmodo, Ars Technica, Racked, among others. 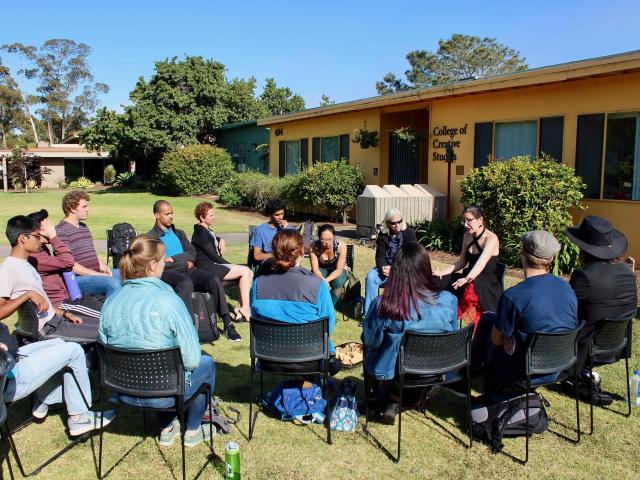 After her talk at CCS, McKinnon chatted with students on the CCS front lawn

Mckinnon was inspired to begin writing about landslides, her graduate school research topic, when she saw the media misrepresenting many of the fundamental issues associated with this type of disaster after a massive landslide in the Pacific Northwest. In one of her articles, McKinnon mentioned that she wished she could teach science to disaster managers, so they could use science to make policy decisions. This caught the eye of the Deputy Administer at the Federal Emergency Management Agency (FEMA), and he reached out and asked McKinnon to start working for him. She revised FEMA’s science curriculum for emergency managers in the United States and helped improve response strategies for catastrophic disasters. McKinnon remembers this as breathtaking for a number of reasons. "It was both the most rewarding and stressful thing I have ever done in my life," she said. "Suddenly I am in a position where if I am clever enough, fewer people will die […] it's an incredible thing, and every time where one of my pieces now goes into play, I'm paying incredibly close attention."

After a hiatus from research, McKinnon was ready to return, but this time integrating what she focused on during her time at UCSB and CCS - space. She now works on Project ESPRESSO, where she is happily combining all of her areas of expertise for in one project by using geophysics techniques for hazard assessments on asteroids, comets, and moons. "I didn't think I would do research again, and now I'm back and doing my old graduate work, but I'm doing it in space," she smiled. "I'm having to use all this background in the field of geophysics, all this background in communication, all this background in space science, all of the research in landslides, and pile it all together to try and figure out how to do this."

Of course, McKinnon still freelances as a science communicator. During the course of her day at CCS, McKinnon invited students to assist in a live TV interview where she provided commentary on the Hawaii volcanic activity. Students also created a podcast on the topic of science communication. Finally, they observed as she wrote and submitted an article on the science and engineering of the Met Gala ballgowns to the online magazine Racked–all during a pizza dinner on the CCS front lawn.