The Mixture of Galaxies

How teenage boredom led to the study of galaxy clusters 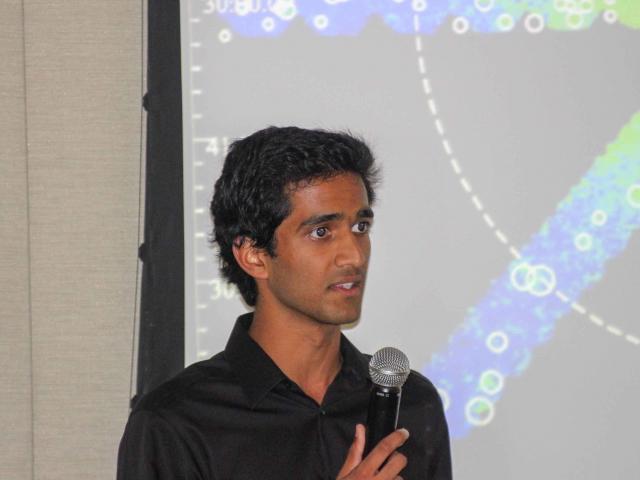 Anoop Praturu giving a talk on his research at the first annual CCS RACA-CON, November 2017

When Anoop Praturu (CCS Physics ‘19) was 14, he visited his grandparents' house in India. He eventually got bored, as would any teenage boy confined to the suburbs, and began bugging his older sister. To alleviate this annoyance, his sister handed him a book and urged him to read it. The book? Cosmos by Carl Sagan. He’s been hooked on space ever since. As he grew more interested in space, he realized, “This could be my job. I could just do this.”

Jump forward to mid-way through his undergraduate studies at UC Santa Barbara, where, for the past two summers, Praturu has been working with the support of a UC LEADS scholarship, which encourages upper-division STEM students of non-traditional backgrounds to continue to graduate school. In the second year, students can choose another UC campus to conduct research for the summer. Praturu selected UC Berkeley to continue the studies of his mentor Mike McCourt, a postdoctoral fellow at UCSB who earned his Ph.D. from UC Berkeley. “I picked up a project he [McCourt] started with his old advisor [Professor Eliot Quataert] up in Berkeley,” he explained on why he targeted UC Berkeley. “So it seemed like a perfect fit to go up to Berkeley and work with his advisor. It was a great experience.” Praturu eagerly looked forward to learning about Professor Quataert and forming a personal relationship with the scientist about whom McCourt had spoken so fondly of. “It’s kind of like when you meet your best friend’s parent,” he added, “and you are like, ‘oh, that is where you get all of these really cool qualities from.’”

Praturu’s research focuses on the composition of galaxies and galaxy clusters, structures that–through gravity–bound thousands of galaxies together. It is a common misconception amongst those unfamiliar with space that stars and planets are the most massive objects in a galaxy and the rest of the space is empty. “When you look at a galaxy, you might see this huge collection of stars,” said Praturu. “But surrounding this collection of stars is actually this giant halo of plasma and hot gas. That makes up the majority of mass in the structure of a galaxy.” Specifically, Praturu studies how heavy elements become distributed throughout the hot gas and plasma cloud which fills the empty space in the galaxy. 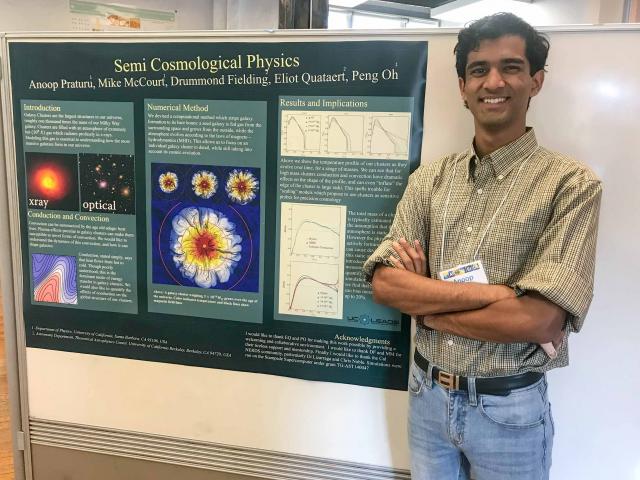 “Heavy elements are produced by stars, and these stars are all concentrated to the innermost thousand or so light-years in these galaxy clusters,” Praturu notes. “You would expect that all the heavy elements produced by them would be somewhere around in those thousand or so light years, but when you take your telescopes and look at these clusters, you see the heavy elements everywhere. They are very well mixed throughout these galaxy clusters. And no one understood why.”

Although older models suggested that it would be incredibly hard to mix galaxy clusters, heavy elements were observed throughout these clusters. Praturu was interested in finding out how heavy elements could be so widely distributed. After using an assortment of math to compare the observations to galaxies models of the Coma, Virgo, and Perseus Clusters (also called the Skull Cluster because in some images, you can see two stars exploding outwards, which look like the eye sockets of a skull), Praturu’s research team concluded that atmospheres are actually very easy to mix. “I could just flick the atmosphere a little bit and all of a sudden it would start mixing violently,” he stated. This leads to the equal distribution of heavy elements around the cluster.

“I really liked this result because we were able to connect it back to the observations people make with the telescopes,” Praturu said of the discovery. “The solution was kind of unexpected, and it was just a lot of fun overall.”

At CCS, Praturu met others who, like himself, dedicate their lives to their chosen field. “I just wanted to dive in and do research and eat, sleep, breathe physics,” he said. “[In high school] there was no one else around me who felt that way, and they all thought I was weird for feeling that intensely about physics. I realized that what I had been lacking was a sense of community of committed people who love what they do so intensely and that is exactly what I found at CCS. ”

In the future, Praturu wants to continue in research. “I enjoyed the creative freedom I’ve had and the ability to think outside the box instead of performing routine tasks.” Praturu is applying to graduate schools, but also considering taking a gap year after he graduates in June 2019.