Originally posted on The Current 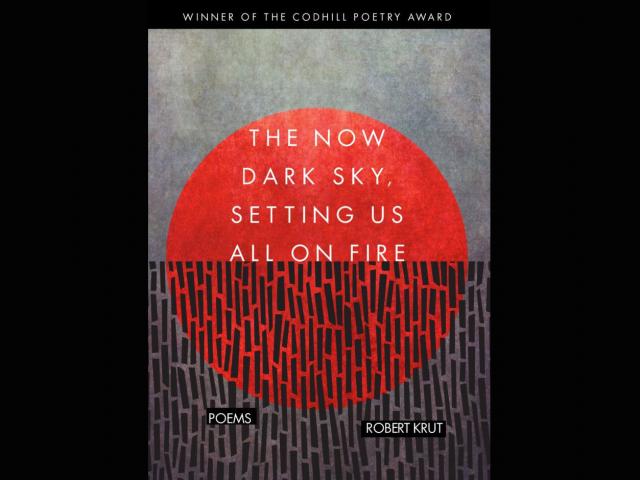 The Now Dark Sky, Setting Us All on Fire, by Robert Krut; Photo Credit: Codhill Press

In Robert Krut’s third collection of poems, “The Now Dark Sky, Setting Us All on Fire” (Codhill Press, 2019), he wanders through a landscape that’s familiar and unhinged, a dream that follows you in your waking hours.

A body disarticulating on a lake, a taxi ride that ends in abandonment, the choked skyline of Downtown Los Angeles and its bleak streets. These are the fruits of Krut’s imagination. If they’re dark, he said, it’s because they reflect a world that’s wobbling like a dying top.

“I didn’t think that I was trying to write about the world in general, but it turned out that way,” said Krut, a continuing lecturer in UC Santa Barbara’s Writing Program and an affiliate of the campus’s College of Creative Studies. “The last book (‘This Is the Ocean’) had darkness, but it was more about trying to push back against that and come up for air. And this one just said, ‘All right, we’re deep in the mud. Let’s just explore that.’ ”

That’s not to say the work is depressing. While the themes are often dark, Krut writes with a rhythmic precision that gives the words an effortless flow and pop. Indeed, the poems often read as though they were written to be spoken aloud, something he said was unintentional — although perhaps not surprising.

“When I was writing this,” Krut said, “I was listening to a lot of jazz and a lot of hip hop, as well as revisiting a lot of the first poetry I loved, like the Beats, so all of those rhythms and that wordplay must have worked their way into my system.”

Many of the poems have a strong sense of place: Los Angeles. Krut lives in the L.A. area and visits downtown frequently. The blue-green Eastern Building and Grand Avenue make appearances, and even the nameless alleys will seem familiar to anyone who’s spent time between Figueroa and Alameda streets.

To love L.A. is to embrace its chaos, the cacophony of voices, the grime, the indiscriminate beauty and how time is measured in distance and decay. Krut’s poems capture his love for the city and the innumerable ways we can writhe in a world that may never love us back.

“Half of these poems are dealing with a blown-out wasteland,” he said. “So what am I experiencing? Where’s that coming from? And how do I just explore that completely, without it becoming self-indulgent or boring?”

One way, perhaps, is to dapple the darkness. Consider “Magic” —

I snapped my fingers and they caught on fire.

I winked at the sun and cried a diamond.

I touch your back, my hand turns to a bouquet.

The breath of a tree overhead
carries the sound of a thousand raindrops.