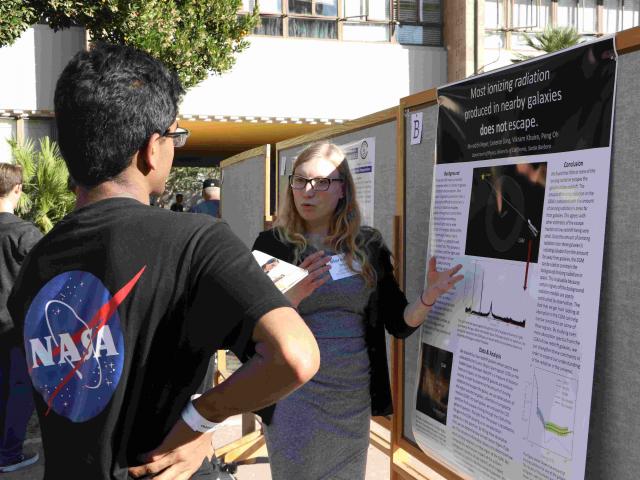 CCS Physicist Meredith Neyer presented a poster at the Conference for Undergraduate Women in Physics (CUWiP) at UC Irvine in January 2020. Founded in 2006, the conference supports undergraduate women physicists by hosting talks, panels, and poster sessions on topics ranging between the academic and the personal.

Neyer presented both a talk and a poster at the CUWiP on research she completed over Summer 2019 as a CCS Summer Undergraduate Dean’s Fellow, and her poster placed in the top three at the conference.

Working in Professor Peng Oh's astrophysics group with postdocs Cameron Liang and Vikram Khaire, Neyer’s research examined how much ionizing radiation (light with high enough energy to ionize hydrogen) can escape from low redshift galaxies. The ‘redshift’ refers to the lengthening of the wavelength as an object moves farther away from us in space. This feature allows a measure of how far away the galaxy is. A low red-shift galaxy is closer to us than a high red-shift galaxy.

We studied the region of diffuse gas surrounding galaxies, called the circumgalactic medium (CGM) to determine how much ionizing radiation is present based on how ionized the CGM gas is.

Neyer analyzed data from the Hubble Space Telescope’s Cosmic Origins Spectrograph to quantify how much light from a quasar was absorbed as it traveled through a galaxy. A quasar, also known as a quasi-stellar object, is extremely luminous. They are believed to be formed from the release of energy caused by objects colliding as they fall into a supermassive black hole.

Neyer’s research showed that most ionizing radiation does not escape from low redshift galaxies. Neyer explained that this is important because ionizing radiation is created in large quantities by stars and other light-producing objects, however, galaxies are full of dust and gas that can absorb this radiation. Knowing the amount of radiation that makes it through galaxies (the escape fraction) is a useful data point for astronomical simulations. Further analysis of such data could also help us better understand the evolution of the Universe as a whole.