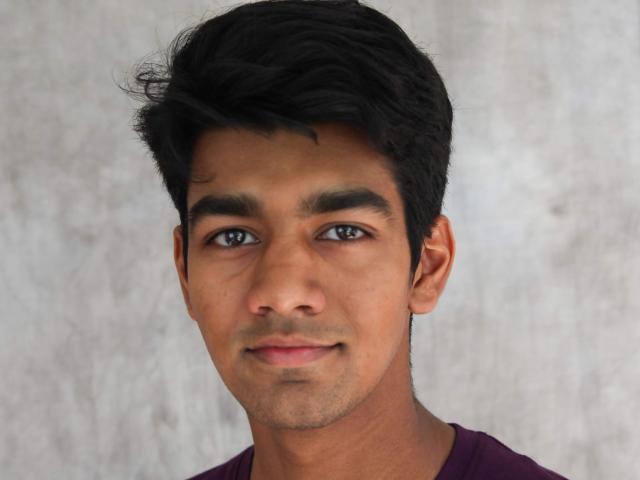 Just below the ocean’s surface are many of Earth’s best-known coral reef ecosystems. Further down, into the darker regions where light begins to fade, are lesser known deep-sea coral reefs. These corals survive hundreds and even thousands of feet below the surface, extending to depths far beyond the reach of sunlight.

"Many people do not realize that corals are not only found on shallow coral reefs, but a lot of species can be found in deeper waters as well"

In Fall 2020, CCS Biology student Sriram Ramamurthy was awarded an internship with the Smithsonian National Museum of Natural History to work with the Quattrini Lab, led by Dr. Andrea Quattrini, which studies the evolution and ecology of deep-sea coral species.

“Many people do not realize that corals are not only found on shallow coral reefs, but a lot of species can be found in deeper waters as well,” explains Sriram. “These types of ecosystems and the corals that inhabit them have been much more understudied compared to shallow water coral reefs, mainly because of their inaccessibility.”

Deep-sea coral reefs may look different from those near the ocean’s surface, however, they share an important characteristic with shallow water coral species: they both form indispensable habitats for incredible marine ecosystems and wildlife that are threatened by human activities. By studying the genetics of deep-sea coral species, not only will understanding of their ecology and evolution increase, but it will also further elucidate the ways climate change and other anthropogenic phenomena impact these irreplaceable ecosystems.

A notable difference between deep-sea coral and their shallow water counterparts is that deep-sea species are not reliant on symbiotic zooxanthellae to survive. Zooxanthellae are a type of photosynthetic algae that provide essential nutrients for coral close to the ocean’s surface with access to large amounts of sunlight. However, since sunlight only penetrates the upper levels of the ocean, deep-sea corals rely on alternative methods to obtain food. Without a mutualistic relationship with zooxanthellae, deep-sea coral feed on zooplankton and other microscopic organisms that are carried along by the ocean current.

To study deep-sea corals, the Quattrini Lab uses molecular and bioinformatic approaches including genomics and transcriptomics. Informally, these approaches are known as ‘omics. “We are using 'omics approaches to explore how the corals in these deep-sea ecosystems have evolved, and the ecological processes which have shaped their evolution,” said Sriram. Due to the difficulty in accessing deep-sea corals and their habitats, ‘omics approaches offer a productive way to learn about these elusive species without needing access to living specimens and their ecosystems. Instead, samples from specimens in the field can be taken back to a lab where genetic information is then extracted and analyzed. Data analysis is an integral part of ‘omic research as these methods generate extensive amounts of information to process.

"I am grateful for this opportunity, given that this pandemic has imposed research limitations for many"

Because of current safety protocols, Sriram worked on his internship with the Quattrini Lab virtually by conducting data analysis of genetic data the lab had previously collected. Sriram’s specific project considered the evolution of azooxanthellate octocorals. “My project focused on identifying and extracting genes that were commonly expressed across three octocoral species in response to stressful conditions. From this we will get an idea about what kinds of genes are being positively selected across all three species,” said Sriram. Octocorals, or Octocorallia, are a subclass of Anthozoa and, as their name may suggest, each of their polyps have eight tentacles. Included within octocorals are many species and groups, such as blue corals, sea pens, and gorgonians. Octocorals are among the most common residents of deep-sea coral communities.

"I am grateful for this opportunity, given that this pandemic has imposed research limitations for many,” said Sriram. “As an aspiring coral biologist, I am excited to learn new methods to study corals and integrate these into my own research program. This kind of genetic work combined with traditional methods will be important in gaining a holistic understanding of how deep-sea coral reefs function."