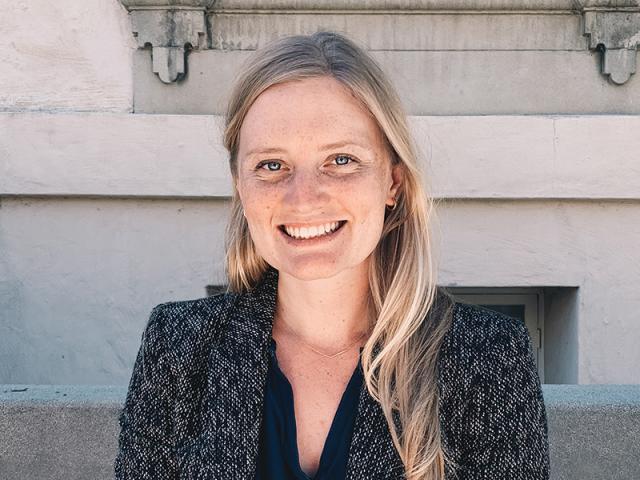 Alexandra (Alex) Phillips ‘15 (CCS Biology) grew up in San Diego and has always loved the ocean, which led her to come to UCSB as a pre-marine biology major. A quarter after she arrived at UCSB, Alex learned about the College of Creative Studies (CCS) and transferred into the College’s biology program. Though she had struggled with math and science courses in high school, she built herself back up in college and found herself ready to hit the ground running when she started at CCS.

“It was nice to finally have a home for all of the diverse scientific fields that I was interested in.” – Alex Phillips ‘15 (CCS Biology)

“It was such a good fit to be in CCS,” said Alex. At the College, Alex had the opportunity to devote herself to research and the freedom to pursue her own interests. She worked in a few labs before eventually finding Professor of Earth Science and Biology David Valentine, whose interdisciplinary lab allowed her to combine her own interests across multiple fields of study. “I was in the biology program, but I was taking classes in math and chemistry and marine biology,” said Alex. “It was nice to finally have a home for all of the diverse scientific fields that I was interested in.”

“She [Alex] was this intellectual force with an insatiable curiosity that drove her in multiple directions simultaneously. ” – David Valentine, Professor of Earth Science and Biology

“Alex fit to CCS like hand to glove,” said Professor Valentine, Alex’s faculty adviser at CCS. “She was this intellectual force with an insatiable curiosity that drove her in multiple directions simultaneously. I always enjoyed advising her because I never knew what intellectual rock she might turn over next.”

Over the course of her undergraduate career, Alex worked on various projects with Professor Valentine, including aboard research vessels. They traveled from San Francisco to San Diego investigating the deep sea using submarines and observing underwater methane seeps and mud volcanoes. “It was an incredible opportunity…to have this experience doing research like a real oceanographer at such a young age was great. And, I met who would become my Ph.D. advisor on that boat,” said Alex.

“More people go to the top of Everest than go to the bottom of the ocean in a submarine…it’s a really unique opportunity.” – Alex Phillips ‘15 (CCS Biology)

Alex’s experience working with Professor Valentine led the two a decade ago to discuss the possibility of creating a new major at CCS in Marine Science. The philosophy underpinning this new major would be the idea that it would provide the opportunity for students, like Alex, to combine multiple disciplines together to study the field of marine science. Professor Valentine continued to work on the design and implementation of the new major over the years with CCS and UCSB leadership. In Spring 2022, CCS hired Professor Anna James as the first new faculty member for the program. The new major officially launched in the 2022-2023 academic year–becoming the first interdisciplinary major at the College–and will welcome its first cohort in Fall 2023.

After graduating from CCS–where Alex has been one of its Commencement speakers–Alex went on to pursue a doctorate at the California Institute of Technology to study how sulfur and carbon leaked into the ocean. “Dave [Professor Valentine] gave such great mentoring…and connected me to advisors. I wouldn’t have applied to Caltech without Dave,” said Alex. For the next six years, Alex worked on her doctorate with Ph.D. advisor Professor Alex Sessions, who she had met through one of the research vessels she participated in as an undergraduate in Professor Valentine’s lab. While in graduate school, Alex started an Instagram account to highlight women in Science, Technology, Engineering, and Mathematics (STEM) fields called “Women Doing Science.” “We highlight[ed] diverse women around the world…pictures[s] of them in the lab and field or underwater in front of the blackboard…whatever their science looks like with a description of their research,” said Alex. The project took off and the page currently has approximately 100,000 followers. Alex recently published an analysis of the page and found that there was higher audience engagement with posts featuring Women of Color, multiple languages, and posts that challenge stereotypes.

After earning her Ph.D., Alex returned to UCSB as a postdoc where she continued researching nutrient cycling in water. “For my postdoc, [I studied] Lake Superior which is the biggest freshwater lake in the US. We looked at how carbon was stored in its sediments over geological time scales which is important for understanding climate change processes,” said Alex. However, though she enjoyed research, Alex found herself wanting to expand beyond being a researcher and was increasingly drawn to outreach and science communication, like with her Women Doing Science initiative. “I found myself pulled away from traditional oceanography research, and excited about the impactful work I could do in the community, especially around diversity and inclusion in science.”

“I am really interested in the general intersection between science, policy, and communication.” – Alex Phillips ‘15 (CCS Biology)

At the end of her postdoc, Alex decided to pursue her other passion for science communication and policy. “I am really interested in the general intersection between science, policy, and communication,” said Alex. Currently, she works at the National Center for Ecological Analysis and Synthesis (NCEAS), a UCSB research center, as a Science Communication and Policy Officer. “I do science communication and lead their external communications and help them connect with policy makers to amplify their science to the right audiences,” explained Alex about her position. Her position also allows her to make use of some of her other interests outside of science, including photography and graphic design.

Alex has no plans to slow down and is excited to continue pursuing her passions and expanding her radical curiosity. “I think I identify as a renaissance woman,” said Alex. “I don’t like to just do one thing. I like to do a hundred things at the same time…So outside of science, I’m a professional photographer…I like to do all sorts of outdoor hobbies like climbing and swimming and I just got a new bike.”