A federal government worker since 2015 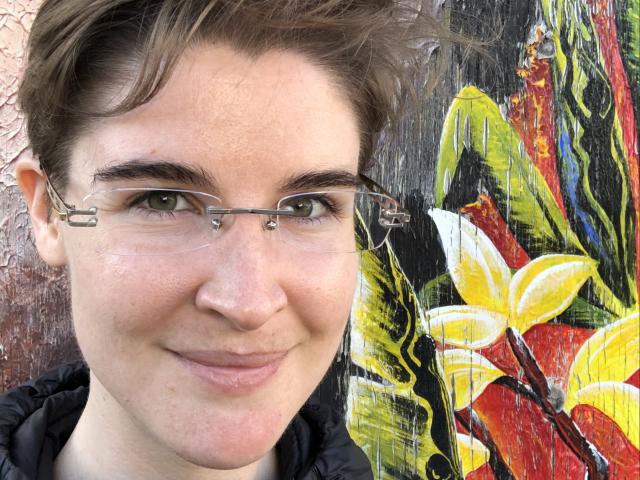 We first caught up with Britta in early 2018. Today, she continues to thrive professionally and be passionately engaged in her community.

“I do not think of myself as interdisciplinary. Instead, I believe that there is no box,” said Britta as she described herself. Britta did not fit into traditional disciplines, and believes she does not fit into standard jobs today either. Britta continued, “The separations between disciplines are made up. People invent these kinds of sets of categories to support and maintain systems of power,” Britta commented. CCS provided the right balance for her in terms of learning, being involved in College activities, and giving her space to develop essential professional life-long skills.

While at CCS from 2005-2009, her current career path did not exist. Britta recalls: “When the healthcare.gov launch failed in 2013 in the United States, people in the federal government realized they needed to do technical work in a more modern way, and they started hiring a lot of people like me. That’s where my current career stemmed, which I started in 2015.” Britta has worked as a federal employee in the United States General Services Administration (GSA), and she is currently working as a senior strategist at A1M Solutions, a small federal contractor that specializes in working with the Centers for Medicare and Medicaid Services. “I chose to work at A1M Solutions because it has an intense and heartfelt emphasis on doing good,” said Britta. Her work focuses on projects that support healthcare for disadvantaged populations, and the company supports strong work-life balance for its employees. “Government technology is a field likely to be resilient in recessions (government has to keep running), and much of it is work-from-home/remote work. I feel lucky, and I recommend it,” said Britta.

Her work at A1M Solutions involves combining skills from different areas, including content design, security compliance, and product management. “Content design is a relatively new approach for government websites, and it’s a great professional opportunity for people who care about using clear language to serve the public,” said Britta. “Government agencies that hire content designers recognize clear and well-structured writing as a core function of government websites, just as important as visual design; it's all part of user experience design.” Britta explains how the current COVID-19 pandemic emphasizes the importance of work done by government content designers. For example, the websites for San Francisco COVID-19 and California COVID-19 have made information about COVID-19 easily accessible. “Both of these websites use plain language to convey key information without burying it in jargon or a wall of text,” explains Britta. “When communicating about COVID-19 became increasingly critical to public health, states and cities with content designers were prepared to meet this challenge and deliver clear, actionable guidance to the public.”

I learned ways to make change within an organization because CCS gave me a safe environment to make mistakes... It was great.

“CCS had to prepare me for a job that did not exist, which is normal,” Britta said, “...and several areas were useful for me while at CCS—and possibly for current or future students.” Those areas included 1) reading from many eras and places and writing down ideas with justifications, 2) holding a part-time job in tech (full-time in summers) which provided useful industry experience and connections upon graduation, and 3) becoming involved at CCS with organization and advocacy. Regarding the latter, Britta fondly remembers: “CCS leadership (especially Dean Bruce Tiffney) strongly supported me. I learned ways to make change within an organization because CCS gave me a safe environment to make mistakes. Among other activities, I gathered meetings of other Literature students interested in making changes at the College, organized CCS student events, tried to figure out how to market Into The Teeth of The Wind, and led a well-intentioned if ultimately unsuccessful effort to update the CCS website. It was great.”

Britta’s father is an English professor (not at UCSB), and he was surprised and delighted that CCS supported Britta as an undergraduate who was trying to change and improve the Literature program and CCS. Britta recalls, “He had never heard of such a program allowing that at other universities he attended or taught at, not even for graduate students.”

Britta’s degree and job titles are tools she uses, but not parts of her. Britta commented, “I can call myself a technical writer, content strategist, content designer, product manager, and a security compliance specialist; the name of the degree and job title only matter when I’m updating my resume or applying to jobs.”  Instead, what Britta cares about in her job usually does not fit neatly into any discipline, including—among other responsibilities—writing government web pages, contributing to designing government technical systems with resilient architectures, structuring government contracts, and implementing security risk management frameworks required by law, among other areas. Britta continued to say, “My job may sound closer to computer science than literature, but I do not believe a computer science degree would have prepared me for this. My technical work is about people, processes, building trust, and managing change. One of my core professional skills is recognizing feelings and talking about them in clear and helpful ways. I learned more about that from Barry Spacks in a memoir writing class than I would have in a computer science class. But I also do need to know a lot about software engineering, and I did not learn that in my literature classes!”

While building technical and professional skills at CCS, Britta dedicated herself to the CCS community and remains engaged with alumni. “I get updates from my dear friend and CCS alumnus Jay Freeman who still lives in Isla Vista and has helped to teach CCS computing classes” said Britta. In addition, Britta helped moderate the UCSB subreddit for several years and enjoys answering questions for UCSB students. She still keeps an eye on the Isla Vista LocalWiki history project she started.

My volunteer work and my professional work both come from my values and politics. I had to figure out how to get jobs that I thought were helpful to others.

In 2010, Britta was the first recipient of the CCS Student Service Award in 2010. “I was surprised and honored!” she said. This Award is given annually to a graduating student who has made outstanding contributions to the intellectual and social functions of the College.

Britta strongly believes in volunteering in her community, including activist work.  Britta shared, “My volunteer work and my professional work both come from my values and politics. I had to figure out how to get jobs that I thought were helpful to others. That’s where I spend a huge chunk of my time and energy, so I needed to find a way to make it useful. Government work is pretty good at that, compared to many other options in the tech industry.”

Regarding Britta’s community service, she said: “I believe it is my responsibility to work against structural inequality.”  Britta is involved with the San Francisco Court Appointed Special Advocates (CASA), National Lawyers Guild San Francisco, and Double Union, and on Wikipedia, improving many types of articles.

For current and future students, Britta strongly advises becoming involved in community service. She recommends students to 1) take care of themselves first so they can be more effective in their volunteer work, and 2) try activism that is meaningful to them, and understand that activism is a skill to be learned through experience, not something that anyone is already supposed to know how to do. In addition, Britta recommends her UCSB experience: “I am glad I spent a lot of time hanging out with my friends, dating them, arguing with them, and having fun with them. My dad tells first year students at his university that half of what you learn in college comes from your friends, and I agree with him.” Britta also spent lots of time walking around the nature preserves near Isla Vista.  She highly recommends to students: “If you’re in IV, walk out to Coal Oil Point as often as you can. If possible, take the CCS class Walking Biology. An informed appreciation for the ecologies of California is a lifelong gift to yourself.”